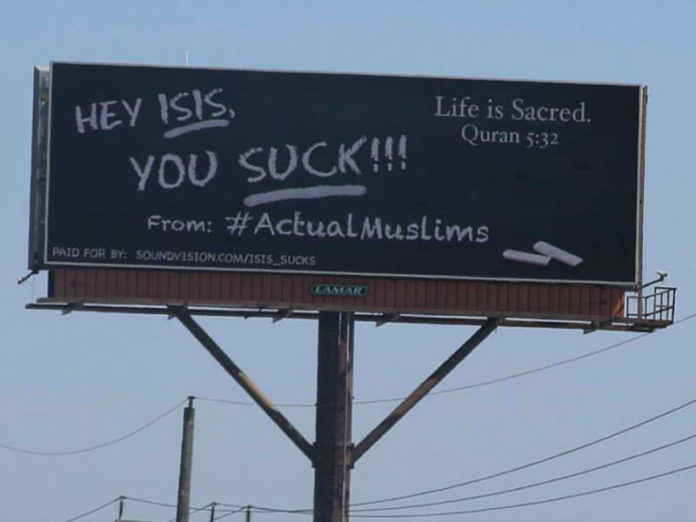 The senseless violence and terror attacks unleashed by the Islamic State of Iraq and Syria or better known as ISIS made people around the world denounce radicalized Islam.

A Chicago-based public relations firm run by Muslims has taken the denunciations to a new level. The non-profit organization, Sound Vision, produced a billboard and social media campaign that pulls no punches:

“Hey ISIS, you suck!!! From: #ActualMuslims,” read the billboard along the highway on northbound I-294 just west of Chicago. It also quoted the verse “Life is sacred,” from the Quran (5:32).

“A group of American-Muslim professionals organized like-minded concerned Muslims to raise funds for this campaign,” Mohammad Siddiqi, executive director of Sound Vision, said in a statement.

Leena Suleiman, the director of creative engagement at Sound Vision, said about 60 donors had pitched in and the campaign was brought about by the frustration of Muslim Americans feel each time a terrorist attack happens, sparking suspicion on every Muslim.

“It’s about shouting out, ‘ISIS does not represent me, I’m Muslim, I say the word ‘sucks,’ I’m like everyone else in my country,'” Suleiman said. “We want to scream it from a billboard.

Scripture Translated in 49 Languages in 2017