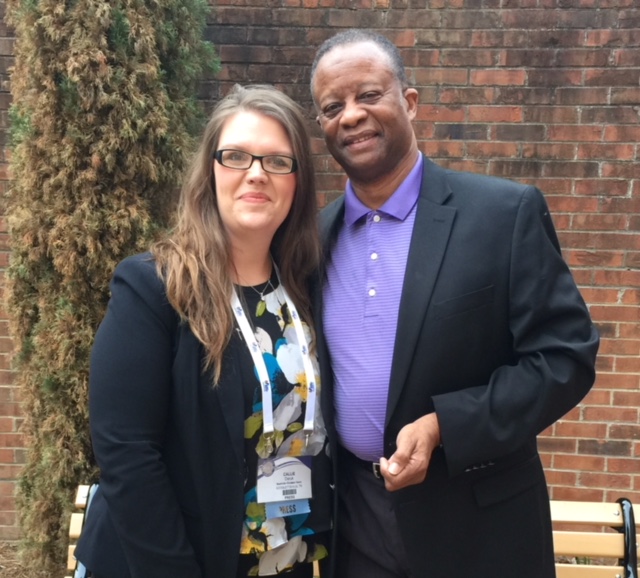 After what must have been an exhausting day of interviews, Hall of Fame vocalist and five-time Grammy winner, Larnelle Harris, showed no signs of slowing down. I had the privilege of conducting his last interview at this year’s 75th annual NRB convention in Nashville, TN. A wooden bench nestled inside a stunning Gaylord Opryland courtyard awaited us. I opened by telling Mr. Harris what a pleasure it was to meet him and he quickly responded with, “It’s my pleasure.”

His words were not mere pleasantries, but a true indication of a most humble and kindhearted man. His recently released memoir, Shaped Notes: How Ordinary People with Extraordinary Gifts Influenced my Life and Career, was our main topic. When asked why he felt now was the right time to share his story after a career spanning more than five decades in the music industry, he responded by saying, “It’s never too late to say thank you.”

Larnelle wanted to tell a story, but not so much about himself. He wanted to tell a story about those who spoke into his life – teachers, lay people, church members, and most of all, his parents. “To be able to tell the story of what they did, and how they touched my life, now, there’s a story there,” he said.

He asked me if I’d ever seen the picture of the turtle on the fence post. “It didn’t get up there by itself. Somebody put it there.” said Harris.  “It may be sitting up there scared to death because you can’t fall off the ground.”

“God doesn’t give us anything we can do on our own. And, when you have the realization of that, you know how ordinary people can do extraordinary things.”

There is no doubt that God used a little boy from Danville, Kentucky to do extraordinary things, and he still is. As a boy, Harris wrote a song called, I Want to be a Star. “Not a star as the world defines it,” he said.

Hung somewhere in the silent sky,

Like the one of a Bethlehem that brought the humble and the wise.

I want the world to know the hope I found in you,

I’ll shine anywhere you ask me to.

I just want to be a star.

For a moment, I forgot that I was sitting across from a man whose soulful voice has spread words of hope into my own heart since I was a little girl. I am no exception however. Just as the light that shines brightly through Larnelle has touched me, it has done so for millions more throughout his incredible career.

I asked Mr. Harris what readers would be the most surprised to learn about him from the book. “I think they’d be most surprised about my beginning years. That my Dad went to prison. That his Dad went to prison. What I want them to come out with is that through my mom’s prayers, that cycle was broken. And, I got some of those prayers too. I got to see a Dad who was the spiritual head of our family. He became that. And, he transformed in such a way that I learned how to be a man. If there’s a hero in this thing, it’s them. It’s Mom and Dad.”

In closing, I asked Larnelle what he wanted readers and fans to take away from this book. His response came full circle to the very reason he wrote the book. “I hope that it makes other’s mindful of the people who have touched them.”

A simple statement, simply stated, by a simply remarkable man.

“you can’t fall off the ground.”

To find out more information and to purchase Larnelle’s book, Shaped Notes: How Ordinary People with Extraordinary Gifts Influenced my Life and Career visit his website. To purchase directly from Amazon, click here.

For KING & COUNTRY and Casting Crowns To Come Together for...